RESIST is about the mechanisms underlying degradation of and recovery from multiple stressors in streams and rivers. We will test a theoretical framework on the mechanisms causing stressor interactions: the "Asymmetric Response Concept" (ARC). With the ARC, we propose that degradation and recovery are governed by four main processes: 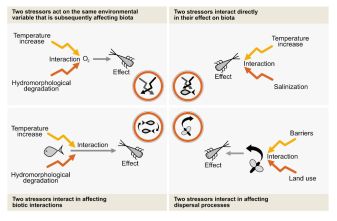 The significance of these four processes differs between phases of degradation and recovery.

Functions recover faster than community composition to a pre-degradation stage, due to functional redundancy among taxa. Recovery is correlated to the degree of redundancy, i.e. the relation between taxon diversity and functional diversity. This effect is stronger for micro- than for macroorganisms.